💡 Remove Unused CSS is the recommended method of optimizing your CSS. If you have trouble with this option, check the status page, and/or try Load CSS Asynchronously instead.

The PageSpeed report will scan all your website’s stylesheets, and if it finds any CSS file with more than 2kb of unused code it will display this recommendation.

Having unused CSS code will:

You can read more about this recommendation here: https://web.dev/unused-css-rules/.

It accomplishes this by automatically removing all the unused CSS, and keeping only the used CSS for each page.

Basic requirements for the feature to work

The external tool will process the information and will generate the Used CSS, which corresponds to the CSS that is actually used in your pages.

HEADS UP! The process of generating and applying the Used CSS is not immediate, it's asynchronous.

Other pages will need a visit to trigger the Used CSS generation and further application.

The generation and application of the Used CSS in your site goes as follows:

Except for the homepage, a visit to a non-cached page, either manual or from the Preload, will start the Used CSS generation and application process.

The URL of each page is sent to our API which will visit the URL and will create the used CSS for that.

WP Rocket will check every 60 seconds with the API to find which of the URLs that were sent have used CSS created for them.

For the ones that used CSS has been created for, WP Rocket will:

For URLs that used CSS hasn't been created, WP Rocket will retry up to 3 times to check if the used CSS has been generated.

If it hasn't after 3 times, WP Rocket will retry to generate the used CSS when:

How to check if Remove Unused CSS is working

You should see the following markup in your page's source code:

The <style> element with an id  wpr-usedcss will contain the resulting Used CSS for the page.

At this point, you can run a PageSpeed test to see the benefits of this feature.

You can also jump to the Technical notes section of this article to get detailed information about this asynchronous approach.

After activating Remove Unused CSS you will see an admin notice with a countdown and the following text:

Once the homepage is completed, Remove Unused CSS will keep processing and generating the used CSS for all the other pages on your site, in groups of up to 100 URLs per 60 seconds.

The following message will appear on WP Rocket's settings page:

WP Rocket: Your homepage has been processed. WP Rocket will continue to generate Used CSS for up to 100 URLs per 60 second(s). We suggest enabling Preload for the fastest results. To learn more about the process check our documentation.

Please note, that while the Remove Unused CSS feature will be ready to work for your other pages when this notice is shown, only a visit to the pages will trigger the generation and later application of Used CSS. This is why using Preload is highly suggested. See more of how Remove Unused CSS works with Preload in the following section of this article.

You will see the admin notices in the scenarios below:

Enabling the Preload feature is highly recommended to have a more practical application of Remove Unused CSS, as it will automate some steps during the process.

When the Preload is active, it will simulate a visit to your pages creating the cache files, and will trigger these actions:

Above's actions happen when you first enable Remove Unused CSS and when the Used CSS is cleared.

Therefore, you could clear the whole site's cache and run the Preload after you first enable Remove Unused CSS or when you've cleared the Used CSS.  For really large sites, you might want to avoid overloading your server and prefer to wait as eventually all pages will have the chance for the Used CSS to be generated through WP Rocket's automatic cache clearing.

If the Preload is not enabled, for a non cached page a visit will be required to trigger Used CSS generation. Once the used CSS is created, the cache of the page will be automatically cleared. The Used CSS will be added to a cache file, the next time there is a visit to that page.

You can also see more details in the Technical notes section of this article.

If the Separate cache files for mobile devices feature is enabled, WP Rocket will create mobile-specific Used CSS as well as Used CSS for the desktop. Both CSS files will be stored on the server's disk in /cache/used-css/.

When Remove Unused CSS is enabled, the Preload Fonts feature will be disabled.

Instead, found fonts in the resulting Used CSS will be preloaded and inserted into the page before the CSS block.

Additionally, the   display=swap property will be applied to the fonts in the resulting Used CSS.

Please note, font-families which are loaded on a certain action after page load, won't be added to the resulting Used CSS. Only fonts loaded directly on page load are preserved in the Used CSS block, the ones you can see in the Network tab in  Developer Tools.

If you need this, you can use the following snippet to disable the Used CSS fonts from being preloaded:

You can add this code as shown here.

Alternatively you can install the following helper plugin for that purpose:

📥  Download (.zip):  WP Rocket | Disable Used CSS Fonts Preload
Developers: You can find the code for this plugin on GitHub.

When Remove Unused CSS is enabled, the Combine CSS files feature will be automatically disabled and will appear greyed out on WP Rocket's settings page.

This is because the resulting used CSS block will replace any existing CSS files, including the combined one.

However,Divi's  Dynamic CSS will be automatically disabled when Remove Unused CSS is enabled because they're not compatible.

Used CSS will be automatically cleared (i.e. full Used CSS clearing) for all pages when:

When to clear Used CSS

When you make changes to stylesheets, or add/modify custom CSS via the WordPress Customizer (or a plugin), you should manually clear Used CSS via the WP Rocket toolbar menu: 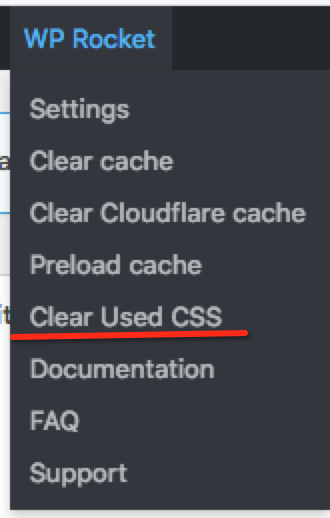 Or using the Clear Used CSS of this URL button in the top bar for a specific post: 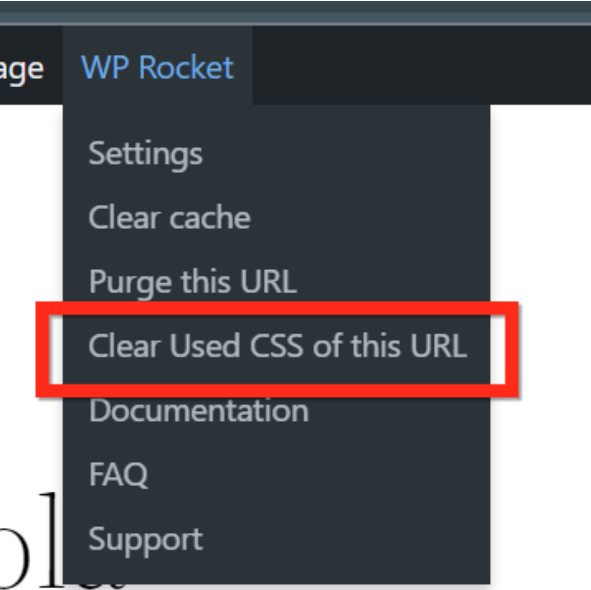 When you clear the Used CSS the existing Used CSS is removed from the disk and the cache will be cleared.

The new Used CSS will be:

Files and patterns can be excluded from the option by using the CSS safelist text area on the settings page.

Any stylesheets and CSS selectors contained in the safelist will be added next time the Used CSS is generated.

If you need to safelist a complex CSS selector like the following one:

You can safelist all the classes in the selector, like this:

You can also use wildcards before and/or after the selectors, as shown below:

Beware as using wildcards can result in too much safelisted CSS.

Finally, you can add one CSS selector per line, like this:

To safelist CSS attributes, e.g.  title in the following example:

You need to add it like this in the safelist text area:

To exclude a font you can use the @ followed by the font family's name.

you should add the following to the CSS safelist box:

Note: The combination of CSS/JavaScript from other plugins/themes needs to be disabled because the safelisting process uses the original CSS and JavaScript files as conditions to set the automatic safelist.

If the Used CSS is not generated/applied to your page, please check the Troubleshoot Used CSS generation issues guide.

Did this answer your question? Thanks for the feedback There was a problem submitting your feedback. Please try again later.
Last updated on November 24, 2022